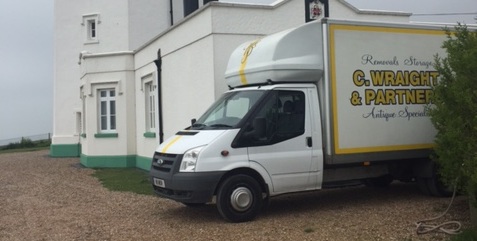 At C. Wraight & Partners Removals Kent, being specialists in moving antiques it is no surprise that one of our repeat clients for over fifteen years has been English Heritage and it’s always interesting to see what they’ll come up with next.

It turned out that they asked us to transport the batteries that had powered the South Foreland Lighthouse, on the coast at Dover. The first lighthouse to use electric light, South Foreland had been erected to put a stop to the loss of lives exacted by nearby Goodwin Sands.

The batteries, obsolete and unused for decades but of immense historical importance, had been moved at some point to nearby Dover Castle and stored in the wartime tunnels and our job was to take them back to the lighthouse. These tunnels were built on Winston Churchill’s orders at the beginning of WWII and it was from these tunnels that the evacuation from Dunkirk was controlled.

Although abandoned after the end of the war and deliberately blocked off in the 1970s, because they had become targets for vandalism, the tunnels had been earmarked as the seat of local government during the Cold War, if a nuclear attack ever came. About three years ago the tunnels were rediscovered and were found to have survived in remarkably good condition behind the blocked entrances. They are now part of the Secret Tunnels attraction at Dover Castle.

Back to South Foreland

The batteries had been stored in the tunnels and needed to be carefully wrapped up before being trollied through the maze to the liftshaft. They were then moved up to ground level and transported back to the lighthouse by a specialist carrier.

Each battery was very large compared to an ordinary car battery but, more importantly, weighed 50kg. This wasn’t too much of a problem at Dover Castle but once we were at the lighthouse, we had to carry them down to the basement, down a very narrow staircase. The only saving grace was that we weren’t asked to take them up to the light!

This particular antique removals job was certainly out of the ordinary but it was a fascinating day, finding out more about the lighthouse and Dover Castle’s wartime history. You might not think your removals job will be as fascinating but we can guarantee we’ll take just as much care.

We’re looking forward to our next English Heritage challenge but in the meantime, if you need antique removals, removals London or removals Kent, contact us and we’ll gladly talk it through with you.

We work with prestigious organisations such as Windsor Castle, the Royal Collection, English heritage and the Canterbury auction gallery